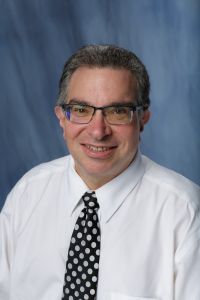 May 5, 2021 — As an undergraduate at MIT studying biology, Mark Segal, M.D., Ph.D., was no stranger to the world of science. But it wasn’t until he found his way to the lab of Monty Krieger, Ph.D., that he realized where his path should take him.

Maybe it was observing Krieger’s unbridled sense of joy in interpreting experiments, or Segal’s own excitement in screening for LDL receptor mutations using a deadly toxin that, if mishandled, could easily kill him, but he learned in that lab he was headed for a career as a physician-scientist.

“The idea that every experiment is trying to tell us something still excites me,” he says, “and the results are most intriguing when they are unexpected – when they don’t fit your hypothesis.”

With Krieger’s encouragement, Segal applied to the MD-PhD program at the University of Texas Southwestern Medical School. Today, he is a professor and he recently stepped down as chief of nephrology in the department of medicine at the UF College of Medicine after 11 years to serve as the college’s senior associate dean of faculty affairs. While it’s been more than 35 years since those days in Krieger’s lab, he still interprets each experiment with the same sense of curiosity, and now he is the one inspiring junior scientists and students to find the joy in discovery.

In July, Segal will become interim director of the UF College of Medicine MD-PhD program, which trains the next generation of clinician-scientists for a career in academic medicine with the expectation that graduates will become future leaders at academic medical centers worldwide. The current program director, Thomas A. Pearson, M.D., Ph.D., M.P.H., has led the program for just over two years and will retire from the University of Florida in December. As interim director, Segal will continue the effort to better position the MD-PhD program for an NIH Medical Scientist Training Program, or T32, award.

“In order to be a top academic health center that pushes and advances the envelope of medical knowledge, we need to provide a ripe environment for our clinical scientists and for our MD-PhD students,” Segal said. “Providing the right resources for developing clinician-scientists begins at the postgraduate level.”

Segal received his bachelor’s degree in biology from MIT in 1984, and after graduating from UT Southwestern in 1992, he completed both his internship and residency in internal medicine at Parkland Memorial Hospital in Dallas. In 1995, he started his nephrology fellowship at Beth Israel Hospital in Boston and served as an instructor at Harvard Medical School for one year. Segal joined the department of medicine at the UF College of Medicine as an assistant professor in 1999, and in 2010, he was appointed chief of the division of nephrology, hypertension and renal transplantation.