Sept. 11, 2022 — Grandparents establish the legacy of their families, shaping the generations to come. In some cases, their contributions can reach far beyond their family trees.

George T. Harrell Jr., M.D., and Albert L. Rhoton Jr., M.D., founded legacies much larger than their last names, impacting the future of medicine. Their dedication to patient care and medical education influenced their own children, and eventually their grandchildren, to continue following in their footsteps after their passing. Below, descendants of these two College of Medicine pioneers share the far-reaching impact of a grandfather’s love and wisdom.

George T. Harrell Jr., M.D., led the planning and opening of the UF College of Medicine in 1956 and the growth of its academic health center, later going on to found the medical school at Pennsylvania State University.

His vision for UF resulted in unique rural outreach clinics, a focus on humanism in medicine and collaborative programs that bridged the health science disciplines. His legacy is carried on by two of his grandchildren, who are UF alumni and current faculty.

“It’s amazing how some of his former students talk about what a profound impact he had on their professional development and their outlook on patient care,” said Grant Harrell, M.D. ’10, an assistant professor in the department of community health and family medicine. “That always gave me a feeling of gratitude.”

Grant Harrell said his grandfather indirectly influenced his decision to go into medicine after inspiring his older sister, Heather Harrell, M.D. ’95, to pursue becoming a physician.

“He was just tickled pink and incredibly proud that I decided to go to medical school,” said Heather Harrell, a professor of medicine and associate dean of medical education. “When I was starting clerkships, he told me nurses were crucially important and that he would always introduce himself to the charge nurse on the first day and make sure he had a good relationship with them because they knew everything going on. That was outstanding advice I followed.”

Grant and Heather Harrell said they both inherited their grandfather’s sense of humanism and care for underserved populations.

As associate dean for medical education, Heather Harrell is responsible for the development and delivery of the medical student curriculum. She has substantial experience in curriculum design, implementation and assessment at both local and national levels.

As medical director for UF’s Mobile Outreach Clinic, Grant Harrell provides care for some of Gainesville’s most vulnerable populations. The clinic is currently expanding its resources to reach further into rural Alachua County.

“It was after I became a medical student that I learned how community-focused he was in his approach toward medical education and designing UF’s curriculum,” Grant Harrell said. “It certainly made me smile to see we had similar thought processes and passions. I do think there’s probably some kind of genetic influence there.”

His grandchildren remember sleepovers at his house, where they would talk, read books and get blanket rides across the floor. The UF College of Medicine remembers him for cultivating the Lillian S. Wells department of neurosurgery into what it is today, leaving long-lasting impacts on the neurosurgeons he trained in the medical field, as well as his own family.

Rhoton became chief of neurosurgery at UF in 1972 and was the first chair when the program achieved departmental status in 1980. He acquired the first $1 million donation in UF’s history, obtained funding for 10 chairs for research and education and began a series of microsurgery courses where he taught thousands of neurosurgeons and residents.

Rhoton had four children, all of whom followed him into health care. One of his daughters, Alice Rhoton-Vlasak, M.D. ’89, grew up roaming the halls of UF Health Shands Hospital and continues to do so today as an OB-GYN. Now, her son, third-year orthopaedic resident Alexander Vlasak, M.D. ’19, adds to the family’s presence at UF.

Vlasak attributes his decision to pursue medicine to his grandfather, whose legacy lives within the halls where he learned, worked and became a physician.

“When Alexander was trying to figure out whether to pursue the early medical school admissions program at UF, my dad met with him and said ‘You should give this a try, I think you can do it,’” Rhoton-Vlasak said. “He was a calm, supporting and guiding influence. It made it easier for Alexander to decide on UF because he felt so good about what UF had done for him.”

The neurosurgery legend influenced Rhoton-Vlasak’s decision to plant her own family’s roots in Alachua County. She had spent her childhood in Gainesville and thrived at the place where her father built a program, but her decision was based on more than that — she wanted her children to grow up in an environment where they formed close relationships with their grandparents.

“You learn a lot of things you wouldn’t learn without having a generation above you in your life,” she said. 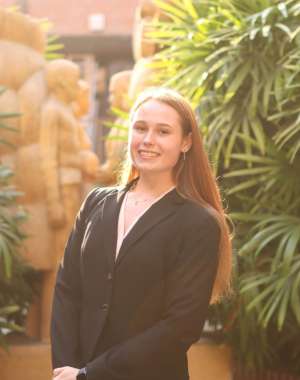 Emma Behrmann joined the UF Health Communications team in summer 2022 as an intern. She is a third-year journalism major at the University of Florida, writing and editing for student-run publications like The Independent Florida Alligator, Her Campus UFL and Atrium. As an intern, she assists the team by writing news briefs, articles and social media.